Review: The Guardian By Margaret Mallory 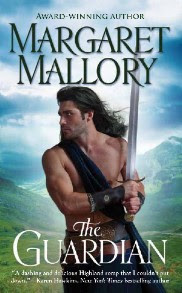 Four fearless warriors return to the Highlands to claim their lands and legacies. But all their trials on the battlefield can't prepare them for their greatest challenge yet: winning the hearts of four willful Scottish beauties.

After years of fighting abroad, Ian MacDonald comes home to find his clan in peril. To save his kin, he must right the wrongs from his past . . . and claim the bride he's long resisted.

As a young lass, Sìleas depended on Ian to play her knight in shining armor. But when his rescue attempt compromised her virtue, Ian was forced to marry against his wishes. Five years later, Sìleas has grown from an awkward girl into an independent beauty who knows she deserves better than the reluctant husband who preferred war to his wife. Now this devilishly handsome Highlander is finally falling in love. He wants a second chance with Sìleas - and he won't take no for an answer.

Ian, Conner, Alex and Duncan are four Scottish highlanders from the McDonald clan who grew up together in the early 1500’s. The Guardian is Ian’s story.

Ian McDonald is returning to the Isle of Skye after spending five years in France with his clansmen, Connor, Alex and Duncan. He left home to escape a forced marriage to a childhood friend Sileas. She was thirteen with unkempt frizzy orange hair, huge horse teeth and was as flat as a board. He has every intention of setting his marriage to Sileas aside and finding another more attractive wife. The men return to find the clan in chaos, the old cheiftain and his heir were killed in the battle of Flodden and Connor’s uncle, Hugh Dubh, has usurped the leadership of the clan. Ian is also amazed to find that Sileas has matured into a beautiful young woman that he now intends to keep as his wife, but she would rather stay married to something scraped off the bottom of her shoe. Sileas has loved Ian since she was a wee bairn, but his treatment of her has all but killed that childhood attachment. She is now one of the most pursued women in the clan, and with her own castle to boot.

In order to accurately express to someone how much I loved this book, I would have to be a writer of Margaret Mallory’s talent. Alas, I am not, so, I will give my meager best and hope it will be enough to convince you that you should read this book. Never in all my many decades of reading romance literature have I ever seen a hero led a chase the way that Sileas led Ian. At the beginning of the story, Ian is such an arrogant MAN. He expects the world to turn on his whim, and Sileas waste absolutely no time setting Ian straight. Ian is not a bad person, he is just a tad self absorbed. Luckily he has his family, his friends, and life in general to smack him in the head and readjust his role in the universe.

The two main storylines of Connor’s quest to oust his uncle from the cheiftain’s position and Ian and Sileas’s romance run together so effortlessly. In many novels, I will skim over passages to get to the “good stuff”. There was no slimming with this book. I read it straight through, and then read it again to make sure I didn’t miss anything. Give yourself a gift. Read this book.