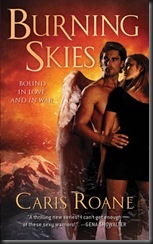 Rating: You Need to Read

A vampire warrior in exile, Marcus Amargi resists the call to return to the ranks of the Guardians who fight thedeath vamp armies. Here on Mortal Earth, Marcus has another battle on his hands—the seductive lure of Havily Morgan. The woman meant for him. Whose blood he craves. The one who comes to him in dreams—and demands his surrender…

A beautiful immortal with extraordinary powers, Havily lives in the realm of Second Earth but, in her fantasies, yearns for her winged lover Marcus. Soon, their bond will be put to the ultimate test. When their bloodthirsty enemies set the night on fire with sky-blazing weapons, Marcus and Havily must unite body and soul, to unleash the full power of their passion—and fight fire with fire…

The war between good and evil is not going well on Second Earth, and Havily Morgan has a front row seat. As a friend to the men who make up the Warrior’s of the Blood, Havily sees the toll it is taking on these valiant vampires. With a strange new power emerging Havily also sees when their lives are about to be lost. This new ability also leads her into having nightly, dream sex with the former warrior, Marcus, who now resides on First Earth as a successful businessman. Marcus is done with the war and second earth, but he is bound to Havily. When the death vampires target Havily for her unique blood and powers, Marcus has a difficult decision to make.

I absolutely adore this series and I really liked this book. Havily and Marcus were not my favorite characters, however. The story and the continuing battle is enthralling and will completely ensnare the reader. The secondary characters, especially the warriors, are literally the stuff of naughty, erotic dreams. The villains are beyond diabolical and I really want drawn out death for Greaves, he is a true psychopath. My two favorite characters are Endelle, Supreme High Administrator of Second Earth. She is six and a half feet of power and bad temper. She wears animal skins and towering stilettos, cusses like a sailor, and will say whatever crosses her mind in front of anyone and their mother. She is a straight up hoot. My second favorite is Warrior Leto. He is shrouded in mystery, currently under the employ of Greaves, and worst of all, he drinks (shudder) dying blood. Damning, I know, but I think there’s more to this traitor than Ms. Roane is letting on.

Burning Skies is ultimately, Marcus and Havily’s story, so back to them. Both have been through incredibly heartbreaking personal losses, so they are very guarded and closed off. After the death of his sister and her children, Marcus abandoned the war and Second Earth. Havily and the other Warriors considered Marcus a deserter. I had problems with this because he had put FOUR THOUSAND years on the front lines of the battle. His tour of duty had more than been fulfilled. So, I see no reason for ill will. Havily was sweet and a little vanilla for me, and she really enjoyed spending a lot of time in front of a mirror. I don’t think she was vain, too much, and Marcus liked her efforts and stylishness. It just isn’t my thing. Marcus was into the designer fashions as well, so two peas in a pod. It was definitely worth the time and money invested and I am highly anticipating the next book.