Review – Tangled Past By Leah Braemel 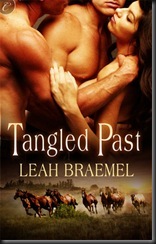 Rating: You Need to Read

Forced to marry a man she just met, Sarah McLeod clings to the hope that she'll finally find the love and acceptance she's always craved. Her tenuous dreams of a happy life on the frontier are in danger of being dashed by the one thing she can't change—her husband's love for another man.

Jackson Kellar's determined to do right by his bride, yet he's torn between his newfound love for Sarah and his still-burning desire for Nate.

With the open frontier closing in around them, is Nate's solution their path to happiness—or will others destroy what they've found together?

When virginal Sarah McLeod spies on Jackson Kellar and Nate Campbell in her father’s barn, she has no idea of the drama about to unfold. In 1887, two men could be hanged for what Sarah witnessed, but fortunately her father jumps to the wrong conclusion when he finds Sarah in the barn with Jackson and Nate. Forced into a marriage, Jackson and Sarah have a unique situation to deal with. Especially since Nate wishes he’d been the one to marry Sarah.

What a wonderfully innovative book. I never pondered the problems of a bi-sexual male in 1880 Texas. Tangled Past tells a gripping and lovely, erotic tale of what that might have been like. Not only is Jackson bi-sexual, but he is also, like Sarah, part Native American. My heart hurt for poor Nate who feels he is now doomed to live a life of solitude. He watches the man and woman that he loves with envy and jealousy knowing he is reduced to the platonic role of close friend. It was just heartbreaking. The journey these three take to build a life together is an emotional tug of war, at times blissful and sometimes agonizing. The fear of being found out by small minded townsfolk haunts them all. This is in addition to the trials and tribulations of cattle ranching in the !800’s. Not an easy life, and certainly not for those who aren’t willing to fight for those they love. This is however a romance at it’s core, so take heart that no one winds up sad and alone. This is a truly beautiful story that I highly recommend.

Email ThisBlogThis!Share to TwitterShare to FacebookShare to Pinterest
Labels: Carina Press, Wendy, You Need To Read