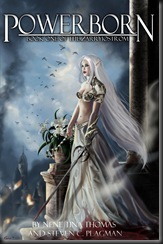 2500 Years ago, a race of immortal Powerborn known as the Lyx dominated the world, enslaving all of the lesser races and pushing the world itself to the breaking point. At the height of the Lyx’s power, Fate intervened and unleashed the most dangerous weapon in its arsenal: the force of nature known as the Harbinger.

Though its power is nearly limitless, the Harbinger is purely a weapon of last resort, and once it has been released it cannot be controlled--it can only be destroyed. Furthermore, there is only a single opportunity to stop it before it completes its destiny and destroys the world, and that opportunity is granted to only one being: the Champion.

In the Valley of Fire, the legendary battle in which the Lyx were consumed in the fires of the Harbinger, the Champion struck down his foe and saved the world from destruction, but not before it could set into motion a new cycle of destruction which will lead to the rise of the next Harbinger.

In the years since the fall of the Lyx, an empire built by Zarryiosiad, the Powerborn who successfully led humanity in a 400 year-long war against the Lyx, has splintered into warring countries. The island nation of Illymar, wealthiest of the countries and the one-time home of Zarryiosiad herself, has seen its fortunes decline and its position weaken to complacency and corruption within.

Ambitious and warlike Dakkadia wants to capitalize upon Illymar’s weakness to expand its territory and influence using their new weapons of war, but standing in their way are the Ferralin Empire, and the Mage Guard of Ithram, an army of Powerborn sworn to uphold peace on behalf of the Zarryiostrom, the church formed in the name of humanity’s greatest heroine.

And watching from the shadows is an ancient race of immortals who quietly shape events, working toward a purpose all their own as a threat more terrifying than the Lyx lies in wait.

I absolutely LOVE this book. Ok I have to admit something, I have been following the development of this book very closely. Nene Thomas is one of my all time favorite artists and thanks to my slightly stalker like behaviors I have the honor of counting Nene and Steven as friends. That being said I still frackin love this book.

I really am impressed with the quality and beauty of this first book from Nene and Steven. When I got it in the mail I spent days sticking it under the nose of every person that came in the house, thankfully my friends are used to my excitement about books but even they were impressed. And they didn’t even read the book, Yet!.

Powerborn is filled with fantastic characters that though they start out well developed you still get to watch as their lives progress and their personalities change according to the situations they are in. The scenes are well written with great flow and vivid descriptions of the environment.

One of the neatest parts of the book (To me at least) is the 20 full color illustrations that Nene created for the book. I love being able to read about the characters then flip back to see what they look like. It gives the story an added dimension in my opinion, and it is something you don’t see very often.

My favorite character in Powerborn is definitely Countess Thorn Demestira. She is truly a woman after my own heart in so many ways. I think Thorn adds just a hint of spice and fire to this story. Her skills are fantastic and her attitude is one I love to see. Strong – Intelligent – Independent and loyal to those she considers family to almost a fault. Not to mention the fact that she is painfully… persistent.

IF you are a fan of great fantasy stories filled with political intrigue, great characters and interesting drama then Powerborn is one book “You Gotta Read”.

Email ThisBlogThis!Share to TwitterShare to FacebookShare to Pinterest
Labels: Lupa, Self Published, You Gotta Read