Review – The Craftsman By Georgia Fox 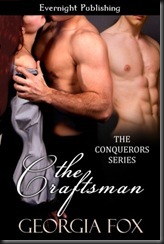 Rating: You Want To Read

Raedwulf, son of a Saxon noble, is finally released from William the Conqueror’s prison. Unfortunately, this amnesty is conditional on an arranged marriage, but he just wants to be left in peace with his carpentry. The last thing he needs is a woman forced to bed him out of duty.

Emma is newly widowed. Believed barren, she never expected to marry again and planned to enter a convent. Instead, a fateful mistake sends her to this quiet, brooding man, who spends long hours alone with his woodwork. She’s stunned to learn that “Wulf” is a virgin, especially when she sees the magnificent craftsman’s tool in his breeches.

Before they are parted by the truth, can she teach Wulf to use that splendid, God-given implement with the same skill as he wields those in his workshop?

Or will Emma learn some lessons of her own at the hands of The Craftsman?

Review:  Ms. Fox has written an entertaining tale of conquerors and the women who love them.  This is the third book in her Conquerors series, and while I enjoyed the plot and the new characters, Raedwulf's character was very different from the expectation I had after reading The Virgin Proxy.  A couple of the plot twists seemed a little far fetched to me, and I felt that there should have been an epilogue to clear up some of the things that were left hanging, such as whether or not Emma was truly barren, what happened to Amias, etc.  Overall, there were only a few grammatical errors and the story was enjoyable.  A good read.

Email ThisBlogThis!Share to TwitterShare to FacebookShare to Pinterest
Labels: Donna, Evernight Publishing, You Want To Read