Review - Destined For An Early Grave by Jeaniene Frost 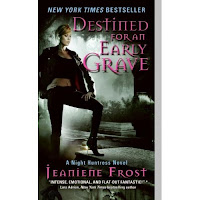 Her deadly dreams leave her in grave danger

Since half-vampire Cat Crawfield and her undead lover Bones met six years ago, they've fought against the rogue undead, battled a vengeful Master vampire, and pledged their devotion with a blood bond. Now it's time for a vacation. But their hopes for a perfect Paris holiday are dashed when Cat awakes one night in terror. She's having visions of a vampire named Gregor who's more powerful than Bones and has ties to her past that even Cat herself didn't know about.

Gregor believes Cat is his and he won't stop until he has her. As the battle begins between the vamp who haunts her nightmares and the one who holds her heart, only Cat can break Gregor's hold over her. She'll need all the power she can summon in order to bring down the baddest bloodsucker she's ever faced . . . even if getting that power will result in an early grave.

Having read every book in Ms. Frost’s Night Huntress series I can truthfully say – this is the best one yet! It grips you from page one and doesn’t let go till the last page is finished. Once I opened the cover I was unable to put it down until I’d finished. Cat is forced to face some things about herself that every woman faces when she realizes that loving someone isn’t enough – sometimes you have to fight your own nature to stay with the one you love. Bones is as sexy as ever but for the first time the reader sees his temper – which for this reader endeared him to me even more. The full cast makes an appearance. While Ms. Frost always manages to surprise me with her twist – I finished this one feeling like I’d just got off the biggest roller coaster in the world. I enjoyed the ride – twice! You Gotta Read this one!
Posted by Admin at 9:51 PM