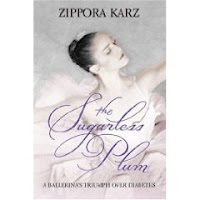 Title : The Sugarless Plum : A Ballerina's Triumph Over Diabetes


For dancer Zippora Karz, a rising young star with the famed New York City Ballet, being diagnosed with diabetes could easily have ended all her dreams. She was just twenty-one when she was plucked from the corps de ballet to dance solo roles like the Sugarplum Fairy in The Nutcracker. It was near the end of a grueling season when she became exhausted, dizzy, and excessively thirsty. Heavy pancake makeup covered the sores under her arms that would not heal, but still Karz neglected to return her doctor's urgent calls. When she finally went to the doctor, she learned that her blood sugar was excessively high. If she continued to ignore her symptoms, Karz risked heart disease, stroke, kidney failure, blindness, and amputation of toes, feet, and legs. Because she was over twenty, doctors misdiagnosed her with Type 2 diabetes, when in fact she had juvenile (or Type 1) diabetes. Her weight dropped and she became dangerously ill as a result of being prescribed the wrong treatment. Once correctly diagnosed and placed on an insulin regimen, she would inject herself with unsafe doses before going on stage in ill-judged attempts to obtain peak performance. The potentially fatal result of Karz's self-experimentatio n became all too real when she nearly put herself into a coma.

Balancing ballet and her blood sugar would be a long and difficult struggle for Karz, but eventually she learned to value her body and work with it, rather than rage at its limitations. In The Sugarless Plum, Karz shares her journey from denial, shame and mis-education about her illness to how she lead an active, balanced, and satisfying life as an insulin-dependent diabetic and ballet star. Through her fascinating story, those struggling with diabetes and other serious illnesses can find encouragement and inspiration as well as practical advice on achieving physical and emotional wellness.

After sixteen years with the New York City Ballet, Karz retired and took her passion and skills into a whole new arena as a diabetes educator and advocate, where today she inspires people to not just manage their illness, but to thrive and fulfill their passions. The Sugarless Plum takes readers deep into the heart and soul of a young dancer, and is a remarkable testament to determination and perseverance.


Review: I can not begin to describe how incredibly moved I was by this book. Even now, as I think back to the journey Ms. Karz has shared with her readers, tears well in my eyes. I battle this disease as well, but on a different front. My husband was diagnosed with the illness in 2002 at twenty five. Diabetes is a living, breathing, enemy in my household. I fight this battle alongside my husband every day. I understand what its like to watch someone suffer with this horrible disease, but as someone who is not diabetic I never realized how much I take for granted in the day to day little things, a worry free ice-cream sundae or a paper cut that goes away without care. Her journey inspired me at a particularly low point when I felt like giving up. Her strength gave me courage to face the years of caregiving ahead of me.

Ms. Karz has an eloquent way with words, a born writer meant to raise up others with her penned speech. She gives such detail and imagery of the ballet life and her world. If you know someone who is diabetic, care for someone with this disease, you owe it to them and yourself to read this book. I tip my writer's hat to you, ma'am, for a well-written, heart wrenching, eye-opening story. Thank you for sharing it with us. This book is one you gotta read.
Posted by Antonia at 4:02 PM