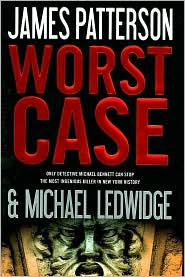 
Blurb:
One by one, children of New York's wealthiest are taken hostage. But the criminal doesn't crave money or power--he only wants to ask the elite if they know the price others pay for their luxurious lifestyles. And, if they don't, he corrects their ignorance--by killing them.  To Detective Michael Bennett, it becomes clear that these murders are linked and must be part of a greater, more public demonstration. With the city thrown into chaos, he is forced to team up with FBI agent Emily Parker, and the two set out to capture the killer before he begins his most public lesson yet--a deadly message for the entire city to witness.

Review:
The Worst Case is seriously a book that will leave you with goosebumps. The serial killer is truly a delusional psycopath with notions that he can educate people on all that is wrong with the world. James Patterson gives you a glimpse into the serial killer's mind leaving haunting images of the lengths he will go to get what he wants. I was intrigued with the relationship between Mike Bennet and Emily Parker, the two lead detectives on the case. There was a little bit of sexual tension but not enough to think that something might actually come of it. The way they worked together though really captured my attention. It wasn't so much the good cop/bad cop angle that got to me, it was the way each knew what the other was thinking before they thought it. To make Emily Parker the detective that knew the most about forensics, also had me more interested in her character. The Worst Case was action packed and had me holding my breath at several moments through the story. I felt their emotion, anger and frustration as more and more children came up missing.

I received this book in the audio version and HIGHLY recommend you purchase it in this form. Read by Bobby Cannavale, Orlagh Cassidy and John Glover, it brought life to the story. I truly don't believe I would have enjoyed the book as much had it not been an audiobook. I have read a few James Patterson books and this one is the best so far, in my opinion. I look forward to reading the next book and I'm going back to buy the Mike Bennet books, he was the one character that I fell in love with. Outstanding job Mr. Patterson and Mr. Ledwidge, you are both writers with enormous talent.
Posted by Unknown at 12:09 PM