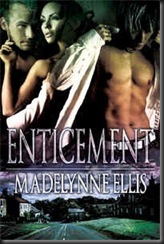 Rating: You Need To Read

Once trouble moves in, it can throw a kink in your plans.
Evie’s future finally looks as tidy as the Yorkshire house she shares with Ross, her serious boyfriend. Until she comes home and sneaks into his after-work shower—and discovers she’s just jumped a naked stranger with mysterious, deep-running ties to Ross’s past.


Fresh from a bartending stint in Japan, Kit plans to move into his newly inherited house as soon as it gets a roof. Meanwhile, his old friend Ross has offered him a spare room. How better entertain himself than by pushing Evie’s buttons…and her boundaries?

Risk isn’t Ross’s style—at least, not anymore—but then again, he was never able to say no to Kit. Memories of their wild adventures still spice his sexual fantasies. Fantasies that could cost him Evie’s love, if she knew.
Captured by Kit’s bad-boy charm, Evie finds her vision of domestic bliss rapidly fading in the growing intensity of Kit’s dark sexuality. Kit knows he’s playing fast and loose with Ross and Evie’s relationship, but he’s certain he can win them over and have what he’s always wanted. A three-way romance.

Evie and Ross were your typical couple, they had just moved in together. He was the town veterinarian, she worked at the local B&B, both were well liked by their neighbors and co-workers, and the sex still had an element of  newness. Thinking she would be surprising Ross in the shower, a naked Evie jumps in on a completely wet, naked and scrumptious stranger. It turns out Kit is Ross’s best mate from his childhood and Ross has agreed to let him stay until his place is refurbished. Confused, hurt, and afraid, Kit left without a word to anyone, six years ago. Now he’s back and he wants to pick up where things left off with Ross. Ross is deeply and completely in love with Evie, but he has never gotten over the feelings he had for Kip. Living in such close quarters, secrets are bound to be exposed….along with other things.

The book, Enticement, while filled with incredibly steamy sex, is also a story with an extremely relevant message. Accept yourself for who you are and you can’t outrun your problems. Evie was a decided introvert with a penchant for voyeurism and public sexuality. Ross had buried his feelings for Kit in a bid for an appearance of normalcy, and Kit runs away at the drop of a hat whenever things get the least bit intense. Of course, if they had all acted as they should have in the first place, there would have been a completely different story. Probably not half as interesting and a lot less fun to read.  Ms. Ellis broached the innate problems of a permanent ménage beautifully. The questions of equality, jealousy and respecting personal boundaries all came into play. If not handled carefully and correctly any of these issues can and will destroy a budding relationship.

Email ThisBlogThis!Share to TwitterShare to FacebookShare to Pinterest
Labels: Samhain Publishing, Wendy, You Need To Read